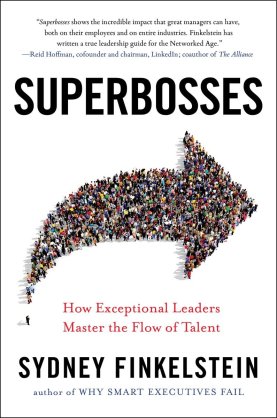 Superbosses is an amazing piece of research, summarised into outstanding lessons for leaders of organisations and schools, that ultimately works better as a short article than a book.

I came across this book in an HBR article (HBR – January-February 2016), which summarised the main findings of author Sydney Finkelstein’s research. Searching diverse fields such as TV comedy, NFL, and high fashion, Finkelstein has identified the traits of Superbosses who are able to build not only their own organisations, but change and build legacies within their entire industries.

Finkelsteins argument revolves around the idea that, although they are from many and varied fields, Superbosses do things differently to other bosses, which enables them to have a far greater impact on their businesses, employees and greater industries. Despite their variances, Superbosses have a lot in common, namely; they hire in unconventional ways, including focusing on intelligence and creativity, they seek out people who just “get it” and adapt their organisation to suit the talent of their staff; and they display hands on leadership which includes setting high expectations, accelerating employees through roles they may not be ready for, and are highly effective delegators.

Superbosses are not necessarily the best bosses to work for at the time, rather they are bosses build dynasties of talent and ideas, which spring forth from their organisation almost like a diaspora.

Take Saturday Night Live’s Lorne Michaels as an example. As founder and Executive Producer of the iconic TV program, in nearly forty years as EP, Michaels has kept the show the anchor of network NBC and Saturday night programming. All this despite a massive turnover of talented writers and performers, and developing a reputation as hard to deal with and reclusive, to the point where comedian Mike Myers based the villain of his Austin Powers movies on Michaels, naming him Dr Evil for good measure.

So what is it that makes Michaels a superboss? Finkelstein points out a number of factors that do, but in essence, it is through creating the conditions where SNL has become the finishing school for comedy writers and actors over the past four decades. Writers are given huge responsibility, empowerment and creative freedom  to put their stamp on the show, while still being held to high levels of accountability by Michaels himself.  This puts them in an accelerated line of personal development when compared to peers at other shows. Michaels also supports his stars when they move on, often finding them deals to setup new shows elsewhere. He never writes off former employees, always keeping the doors open for future work or collaboration.

The SNL/Michaels diaspora spreads through virtually every aspect of popular culture in the last four decades from movies, to late night talk shows, sitcoms and variety shows. Even personal favourite, Seinfeld creator and well known curmudgeon Larry David had an ill-fated stint at SNL in the 80’s. Despite the fact that David only got one of his sketches aired during the entire season, (he publicly quit on a Friday, then showed back up the next week as if nothing happened, a-la George Costanza) he met Julia Louis Dreyfus who would later become Elaine on his show Seinfeld. David was also welcomed back for the 40th anniversary episode, where he stole the show in an interaction with Jerry Seinfeld.

While the key features of Superbosses are outlined clearly and easy to understand, the book becomes rambling and incoherent in its use of examples. Perhaps because the examples span such diverse organisations as TV shows, NFL teams and businesses, the in depth analysis is never really forthcoming. We are instead treated to each chapter having one in depth example (which works) followed by a laundry list of smaller similar examples, which act to confuse the point, rather than solidify it.

So does the book have implications for schools? Of course it does. The lessons of Superbosses transfer directly over to schools and school leaders. No matter which country, city or district we work in as educators, we know of certain Principals or schools which seem to produce more leaders than other schools do. Perhaps it is the skills of the Principal, or the complexity of the school itself, which accelerates the development of the leaders, but the notion definitely exists in education. There are most definitely schools and Principals who have spawned more Principals and leaders than others, and therefore are able to have an impact on the system, not just their own community.

In short, Superbosses is great research synthesised into some great ideas from which educators can learn a lot. I really wanted to love this book, but I just couldn’t, so save yourself the time and read the HBR article instead.